Universal Robots’ ActiNav is a UR+ application kit that not only picks parts from bins, but is able to precisely place that part into a machine for further processing. 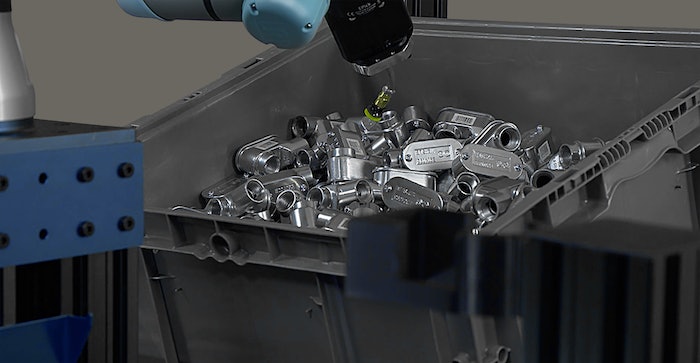 Pick-and-place applications are not new territory for robots. But the ability to pick a part from any unstructured orientation and then precisely place that part into a machine for further processing is not a task achieved easily. A new application kit that combines a Universal Robots collaborative robot (cobot) with a 3D sensor and autonomous motion control is designed to make automated machine tending quick and easy.

Universal Robots’ UR+ ecosystem—where third-party suppliers are certified to provide grippers, vision systems, and other add-ons that work seamlessly with UR’s cobots—has expanded recently into application kits. These move beyond components, instead combining multiple elements to create a more integrated production system, explained Joe Campbell, senior manager of strategic marketing and applications development for UR. “They accelerate the speed with which you can deploy factory automation,” he said.

ActiNav Autonomous Bin Picking is the latest UR+ application kit, this one focused on machine tending. Typical pick-and-place applications use machine vision or other sensors to enable a robot to pick items, requiring significant efforts in integration and programming to do more than just drop the items into a box. ActiNav combines real-time autonomous motion control, collaborative robotics, and vision and sensor systems to enable manufacturers with limited or no bin picking deployment expertise to accurately place parts with little operator intervention. ActiNav combines a UR e-Series cobot with a 3D sensor and real-time autonomous motion control to enable picking from a bin for precise part placement in a machine.Universal RobotsThe key target for ActiNav is machine tending of plastic or metal work-in-process parts—parts that are cast, stamped, forged, or molded typically into bins and then moved to a machining station for further processing before going into final assembly, said Eric Andersen, product manager for UR. The sweet spot, he explained, is a part ranging around half an inch to 4-5 inches—small enough to fit a substantial number into a bin but not so small that a bowl feeder or other mechanism makes more sense.

Machine tending provides a significant market opportunity for UR’s cobots to go after. “There are millions of machines that need to be tended. There are more people tending machines than even assembling products,” Andersen said. “It’s a challenge to find workers to tend those machines.”

Not only does the work fall within robotics’ three Ds—dirty, dull, and dangerous—but typical cycle times of 10-90 seconds requires an operator to be at one machine 100% of the time while also being very underutilized, Andersen added.

Cobots are a good choice for machine tending applications, Andersen said, because they take up less floor space, they’re safe around workers, and they’re easy to train and teach. When it comes to using robots for bin picking, however, their history has been that it’s complicated and risky—especially if a manufacturer needs to place a part in an oriented and precise location rather than just drop it. Traditionally, a part would first need to be oriented into a known position. But given that most parts are already in bins, a more flexible and scalable option is to pick those parts from bins and place them directly in machines.

“That’s really what ActiNav is changing,” Andersen said. “It simplifies the process and makes repeatable, precise placement of parts—picking from an unstructured location—very reliable and easy.”

ActiNav autonomously inserts parts into CNC or processing machines for such functions as drilling, deburring, welding, trimming, or tapping. The high-resolution 3D sensor and CAD matching enable high-accuracy picks powered by ActiNav’s Autonomous Motion Module (AMM), which determines how to pick the part and then controls the robot to pick the part and place it in a fixture each time. The autonomous motion control enables ActiNav to operate inside deep bins that hold more parts—something that standalone bin picking vision systems struggle to accomplish.

“Now with ActiNav, manufacturers have the possibility to automate a machining application that was not really open to them before,” Andersen said. “For around $100,000, you can quickly and easily deploy bin picking with a return on investment of less than 18 months for a two-person operation.” 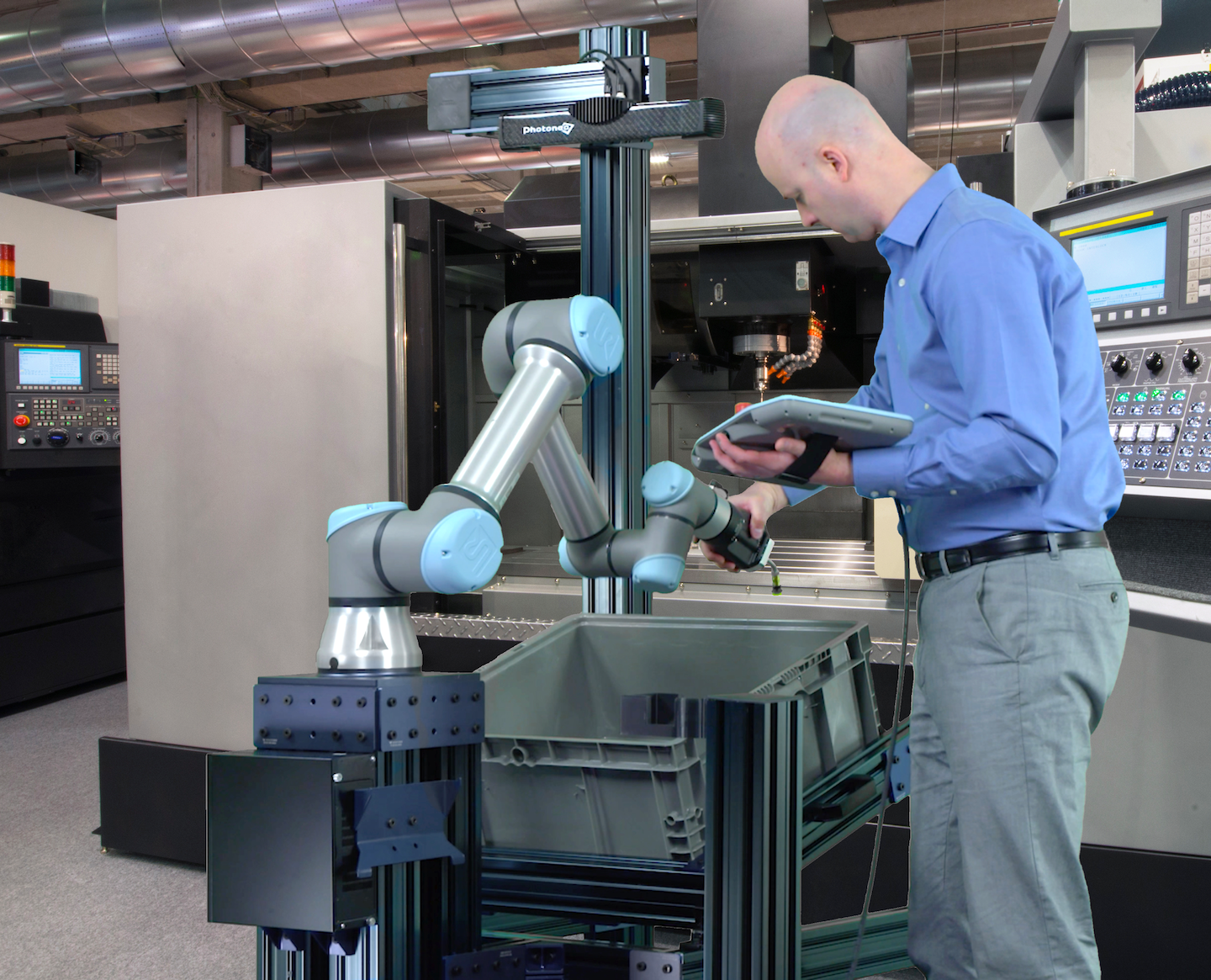 ActiNav uses UR’s teach-by-demonstration principle with the UR cobot teach pendant to train the robot.Universal RobotsThe ideal customer is a manufacturer with one or two automation engineers who are comfortable with programming a simple pick-and-place application, Andersen said. “ActiNav is not more complicated than that,” he said, emphasizing the teach-by-demonstration principle with the UR cobot teach pendant. The ideal customer will also have typically 20-40 machining stations. “Not all of those machine stations are going to be suitable,” Andersen added. “But we’re going to easily identify two to five that are great candidates for ActiNav.”

The ActiNav kit can be easily and quickly deployed by a manufacturer’s in-house automation team or through assistance from a UR distributor or integrator. ActiNav works with UR’s UR5e and UR10e e-Series cobots, a UR+ component or user-defined end effector, and application-specific frame or fixture as needed.

ActiNav was developed in close collaboration with sister company Energid Technologies (both UR and Energid were bought up by Teradyne, a U.S.-based supplier of automated test equipment). Energid motion planning and motion control expertise figured into the project, Andersen noted, but was tightly developed on the UR platform and user experience.

The current iteration of the kit uses a high-resolution 3D scanner from Photoneo, but UR will introduce other sensor technology options in the future, Andersen noted.

Companies in this article

Late-stage differentiation and end-of-the-line tasks have never been easier to automate thanks to collaborative robots. Streamline your packaging and palletizing operation to be simpler, faster, and more efficient. Relieve workers from repetitive work and
Jun 9th, 2020